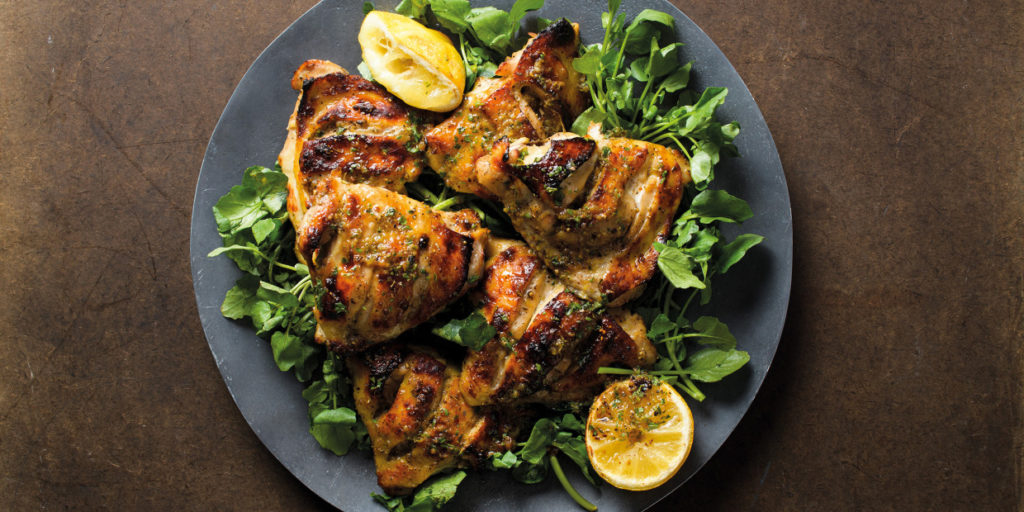 Heat the oven to 475 F with a rack in the lower-middle position. Grate 1 T. zest from the lemons, then halve the lemons and trim off the pointed ends so the halves sit stably with cut sides facing up; set the lemon halves aside. .In a small bowl, stir together the zest, garlic, dried oregano, 1Â½ tsp. salt and 1/2 tsp. pepper. Measure 1 T. of the lemon-garlic mixture into a large bowl. Stir 4 T. of oil into the remaining mixture; set aside. To the large bowl, add the remaining 1 T. oil, the honey, 2 tsp. salt and 1/2 tsp. pepper, then stir to combine. Using a sharp knife, cut parallel slashes about 1 inch apart all the way to the bone on both sides of each chicken thigh. Add the thighs to the bowl and turn to coat on all sides, rubbing the seasoning mixture into the slashes. Arrange the chicken, skin-side up, and the lemon halves, cut-sides up, on a rimmed baking sheet. Roast until the chicken is beginning to brown and the thickest part reaches 165-170 F, about 20 minutes. Leaving the chicken in the oven, turn on the broiler. Continue to cook until the chicken is deep golden-brown and the thickest part reaches about 175 F, about 5 minutes. Remove from the oven. Place the watercress on a serving platter, creating a bed for the chicken. Using tongs, place the chicken on top of the watercress. Squeeze 3 T. juice from 1 or 2 of the lemon halves, then stir the juice along with the fresh oregano into the lemon-garlic oil to make the salmoriglio. Drizzle the sauce over the chicken and serve with the remaining lemon halves for squeezing.