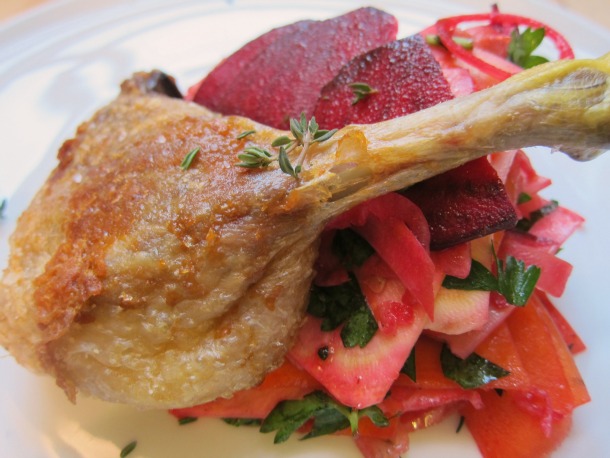 In a large bowl, whisk together the olive oil, vinegar, lemon juice, thyme leaves, honey, pepper, and salt.Â  Use the fine slicer disc of a food processor to thinly slice all the vegetables.Â  Add them and the parsley to the large bowl, and toss with the vinaigrette.Â  Cover with plastic wrap, and refrigerate until later.Â  Preheat the oven to 300 degrees F.Â  In a wide oven-safe skillet, place the duck legs, skin side down, over medium heat.Â  Season the duck with salt, and sear until the skin begins to crisp.Â  Place the whole skillet, with the duck, in the oven.Â  Roast for 1 hour, then flip the duck legs, and roast for another hour. To serve, mound the softened vegetable salad on a plate, and top with a crispy, almost-confited duck leg.