[Jamie Oliver] This is a great chutney. The sweetness created in the cooking of the peppers calms the heat of the chillies down, giving the chutney a lovely warmth. Itâ€™s fantastic with crumbly cheese, smeared on toast with melted cheese or with Welsh rarebit. Also lovely stirred into gravy with sausages, or with cold leftover meats. Crack on and have a go. 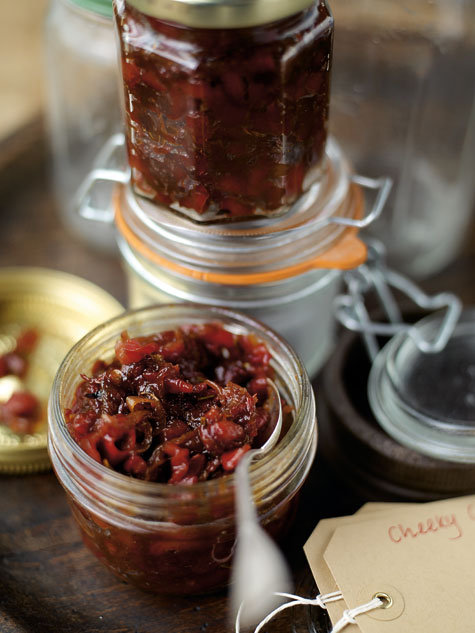 a sprig of fresh rosemary, leaves picked and chopped

a 5cm piece of cinnamon stick

If you want your chutney to last for a while, make sure you have some small sterilized jars ready to go. Place your chillies and peppers over a hot barbecue, in a griddle pan or on a tray under a hot grill, turning them now and then until blackened and blistered all over. Carefully lift the hot peppers and chillies into a bowl (the smaller chillies wonâ€™t take as long as the peppers so remove them first) and cover tightly with clingfilm. As they cool down, theyâ€™ll cook gently in their own steam. By the time theyâ€™re cool enough to handle, youâ€™ll be able to peel the skin off easily.Â  When youâ€™ve got rid of most of the skin, trimmed off the stalks and scooped out the seeds, youâ€™ll be left with a pile of nice tasty peppers and chillies. Finely chop by hand or put in a food processor and whiz up. Then put to one side. Heat a saucepan and pour in a splash of olive oil. Add the onions, rosemary, bay leaves and cinnamon and season with a little salt and pepper. Cook very slowly for about 20 minutes or so, until the onions become rich, golden and sticky. Add the chopped peppers and chillies, the sugar and the vinegar to the onions and keep cooking. When the liquid reduces and youâ€™re left with a lovely thick sticky chutney, season well to taste. Remove the cinnamon stick and the bay leaves. Either spoon into the sterilized jars and put them in a cool dark place, or keep in the fridge and use right away. In sterilized jars, the chutney should keep for a couple of months.