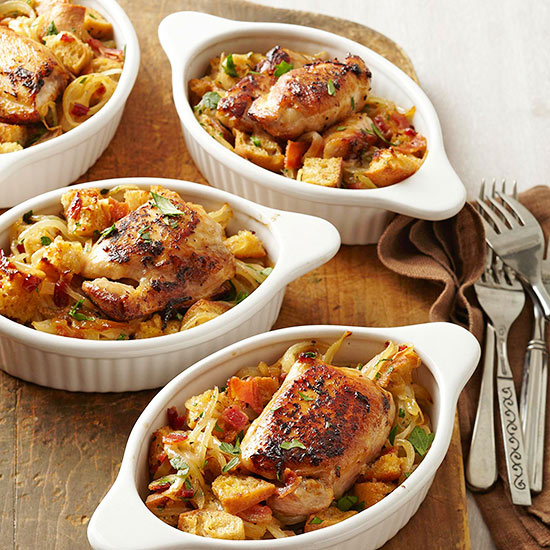 Preheat oven to 400 degrees F. Heat a large skillet over medium heat. Cook the bacon in hot skillet about 10 minutes or until brown and crispy, turning once. Remove and drain bacon on paper towels. Reserve 1 T. of the bacon drippings in skillet. Add onions. Reduce heat to medium-low. Cook, covered, for 13 to 15 minutes or until onions are tender, stirring occasionally. Uncover; cook and stir over medium-high heat for 3 to 5 minutes or until golden. Remove from heat. Chop the bacon. In a medium bowl combine the bacon, caramelized onions, bread cubes, broth, egg product, 2 T. parsley, and the pepper. Stir gently to combine. Divide dressing mixture among four individual 12- to 14-ounce casserole dishes; set aside. In the same skillet cook the chicken in hot oil over medium heat about 5 minutes or until browned, turning once. Place one chicken thigh on dressing mixture in each casserole. Bake, uncovered, for 15 to 20 minutes or until an instant-read thermometer inserted in stuffing registers 165 degrees F. Before serving, sprinkle with additional parsley. *Tip: To dry bread cubes, spread them in an even layer in a 15 x 10 x 1-inch baking pan. Bake in a 300 degrees F oven for 10 to 15 minutes or until cubes are dry, stirring twice; cool. (Cubes will continue to dry and crisp as they cool.) Or let bread cubes stand loosely covered at room temperature for 8 to 12 hours.