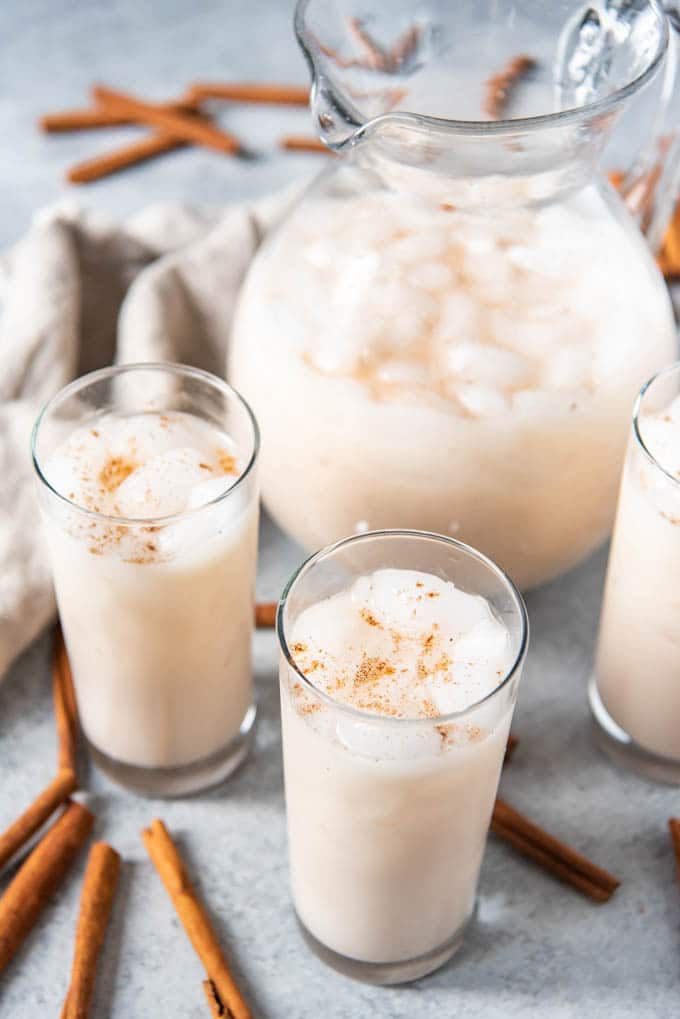 Combine the rice, cinnamon sticks, and 2 C. of the water in a blender.  Blend until the rice and cinnamon sticks are roughly ground up (1 to 2 minutes).  Add the 2 remaining C. of water and blend again. Let the rice mixture soak at room temperature at least 8 hours, or overnight.   Once the rice mixture has soaked for at least 8 hours, pour through a fine mesh strainer into a pitcher.  Discard the rice and cinnamon stick solids and rinse the strainer well.  Strain the mixture again one more time, just to make sure the horchata isn’t gritty.   Stir in the milk, vanilla, and sugar, then chill ready to serve.  Serve over plenty of ice with a sprinkle of ground cinnamon on top.

These posts are a collection of recipes that I have pulled from magazines, cookbooks, pinterest, blogs, and anywhere else I come across something tasty sounding. In order to FIND that information when I needed it, I decided a highly categorized blog would be in order (After failing miserably to teach myself access to make a non-web database!). I never intended to promote this site, I have “Discourage[d] search engines from indexing this site” — this is a place for me and my family. Because of this I didn’t bother to cite sources. If you somehow find your way here and come across a recipe that is yours – I apologize and I will happily update the post with your link or remove it if you prefer. Thanks!

A Note on emergency preparedness recipes.

Many websites tag recipes as “Pantry Friendly” if they include as little as one long term storage ingredient, such as rice or wheat berries. I think that is bunk.

Here on my site, if a recipe is tagged “LTS” that means it can be prepared ENTIRELY with shelf stable ingredients. Some of those ingredients may not be found in a typical grocery store and might include dehydrated or freeze dried items, but the recipe requires no perishable items.

A recipe tagged as “Pantry Friendly” can be made with almost all shelf stable ingredients. It will include 1-3 more perishable items, often those you would have in the first few days of an emergency (or if you have homesteading resources such as a garden or chickens), such as milk or eggs or fresh produce.

Ingredients that I consider mid-range, such as carrots or potatoes kept in a root cellar, are counted as NOT shelf stable, and would trigger the “Pantry Friendly” designation instead of “LTS”.