Many foods can be cooked without using traditional cooking utensils such as pots, pans, or Dutch ovens. Novelty cooking methods include cooking directly on coals or rocks, cooking food inside of food, cooking using green sticks, and cooking using only aluminum foil.

Possibilities include the use of an orange as your â€œpotâ€. Slice an orange in half so that the stem end is not in the middle of your cooking vessel. Remove the orange sections and eat them immediately! Place a ball of ground meat in the middle of the shell to which you have added a bit of onion, perhaps some green pepper, and some salt and pepper. Place the filled orange shell directly on the coals, and cook for 15-20 minutes.

If you were eating breakfast, you could use the orange peel as an egg-cooking device. Crack one egg into each half of the orange shell, and place each shell directly on the coals. The eggs should be ready to eat in approximately 10-12 minutes.

A whole onion could be used to cook the above two foods instead of the orange. Cut the onion in half, and remove enough of the onionâ€™s middle so that you have a shell which is about 3/8â€ to 1/2â€ thick. Place the foods in the half and cook just as before. The time required to cook your mini-meatloaf or eggs should be about the same as with using the orange peels. 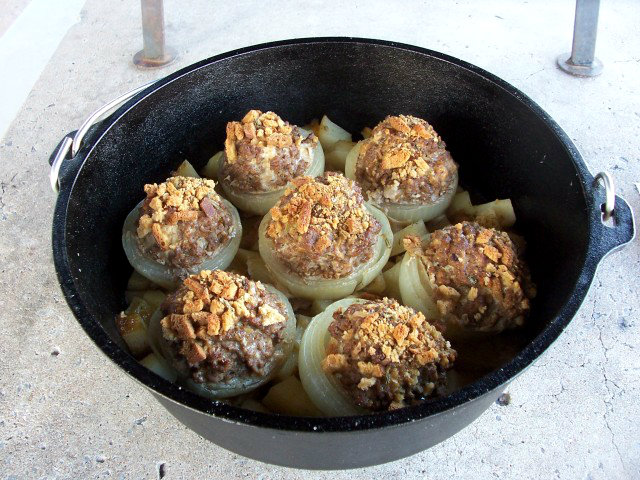 How about some corn on the cob cooked right on the coals? Peel the corn shucks (the green outer layer) about halfway down the ear of corn. Remove the silk, which is the stringy threadlike stuff right next to the corn kernels. Moisten the corn with a little bit of water and replace the shucks. Place the ear of corn on some coals and cook for 5 minutes. Rotate the ear of corn one half of a turn and cook for 5 additional minutes. A little bit of butter or margarine, and a touch of salt, and you are ready to go!

Cooking with nothing but a paper bag? Sure, and here is how! Get a lunch sack sized paper bag and a pointed stick. Place a strip of bacon or two in the bottom of the paper bag. Break an egg in the bag over the bacon strips. Begin rolling the bag from the top down with 1â€ folds until halfway down. Push the pointed stick through the rolled end of the bag and hold the bag over the coals. Grease from the bacon will coat the bottom of the bag. The egg should be done in about 10-12 minutes. Keep the bag from getting too close to the fire as the grease is quite flammable. When ready, you can eat right out of the sack!

If you want to try an easy dessert, try this one. Cut a wedge-shaped section out of the length of one banana. Place marshmallows and chocolate chips into the cavity of the banana. Wrap the banana in foil and heat over coals for 4-6 minutes. Unwrap and put some pineapple pieces, cherries, or chopped nuts over the banana and you have the trail version of a banana split.

In terms of supported or suspended cooking methods, why donâ€™t you try one of these options. Make yourself a batch of biscuit dough just as instructed per the Bisquick box or similar product. Find a green tree limb maybe 1 to 1 1/2â€ in diameter. Clean the bark off of the limb, and carve a couple of grooves around the limb to make the surface somewhat rough. After mixing the dough , roll or pat the dough into a strip 12-18â€ in length, 2â€ wide, and about 1/4â€ to 3/8â€ thick. Moisten the stick (spit), and begin wrapping the dough in a diagonal pattern around the spit leaving a slight space between the wraps of dough. Press the dough gently as you wrap so that it will stick to the spit. Suspend the spit over a bed of coals and cook until golden brown. Keep rotating the spit as you cook so that the bread will cook evenly.

If you like shish-kabobs, you can use a sharpened stick as your skewer. Find a green stick, perhaps 18â€ to 24â€ in length and remove the bark. Use a hardwood like oak, hickory, or ash if available as it will likely not leave an aftertaste with the food. Wood from cedar, pine, or other evergreens may leave an undesirable aftertaste due to the high levels of resins and pitch in these particular woods. Cut pieces of beef from skirt steak, or other such cuts, into 1â€ square chunks. Cut an onion into quarters and a green pepper
into wedges. If you want a little different flavor, also gather about 16 good sized chunks of pineapple. Begin threading these different items onto the green stick in an alternating pattern, such as beef, pepper, onion, pineapple, etc. Repeat this pattern until you and/or your other members use up your ingredients. Cook over hot coals, and rotate the stick regularly so that the food cooks evenly. The kabob should be ready in 15-20 minutes if you regulate the heat appropriately.

If you have a sweet tooth, try this recipe. Select a good cooking apple such as a Jonathan or a Rome. Use a sharpened stick by pushing the stick into the apple until secure. Place the apple 2-3 inches over the coals, and roast the apple until the apple skin is easily removed. Remove the skin (be careful, itâ€™s hot!), and then roll the apple in a small bowl filled with a mixture of sugar and cinnamon. Begin roasting the apple again until the sugar melts and forms a glaze or coating over the apple. Remove the apple from the stick and
eat your â€œapple pie on a stickâ€!