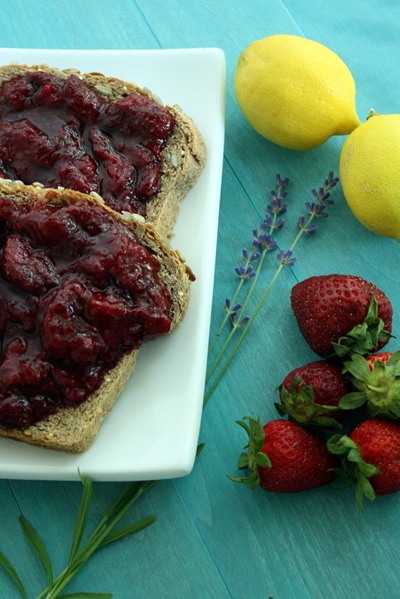 Begin by preparing the jars. Put four, half-pint jars in a stockpot or other large pot and cover with water. Place the pot on the stove over high heat and bring to a boil. Put the jar lids in a separate bowl and set them aside; also, place a small plate in the freezer. While the jars process, begin preparing the jam. Place the strawberries and the sugar in a large saucepan and bring to a simmer over medium-high heat, stirring frequently. Allow to simmer for five minutes. Now pour the mixture into a colander set over a large bowl. Gently stir the berries in the colander to strain off most of the juice. Set the colander and berries aside, preferably over another bowl or plate to catch juice drips, and return the juice to the saucepan. Bring the juice to a boil, stirring occasionally. Allow the juice to boil until reduced to a syrup measuring 1Â½ C., about 20 minutes. Return the strawberries and any juice that has drained from them while sitting to the saucepan with the reduced syrup. Stir in the lemon juice and the lavender and return the mixture to a simmer. Continue to simmer until a small dab of jam spooned onto the plate in the freezer becomes somewhat firm (it will not gel), about 15 minutes. Spoon off any accumulated foam from the saucepan and stir gently. At this point, ladle boiling water from the pot with the jars into the bowl with the lids until the lids are covered. Place a folded kitchen towel in the designated work area. Use a jar lifter to remove the sterilized jars from the canning pot, being careful to pour the water in each back into the pot, and place upright on the kitchen towel. Note, the jars should have boiled at least 10 minutes in order to ensure they are sterilized. Ladle the hot jam into the hot jars, leaving Â¼-1/2 inch of head space. Once the jars are filled, use a damp cloth to wipe the rims of the jars. Drain the water off the jar lids and place the lids (flat lid and ring) on top, securing until finger tight. Return the filled and sealed jars to the pot of water. Make sure the water is at least one inch above the tops of the jars. Return to a boil and allow to boil for five minutes to process. Remove the jars from the water and again place on a folded towel. After one hour, check the seals on the jars by pressing down on the center of each lid. If the lid is easy to press down and then pops back up (just like an open jar of pickles), the lid has not sealed properly and the jar should be refrigerated. Allow the sealed jars to cool for 12 hours before storing in cool dark place. Once open, refrigerate any unused contents.