Look for padron peppers at farmerâ€™s markets or fancy foodie stores throughout the late summer. If youâ€™re sensitive to spice, fry up a batch on their own first to test them out. Peppers from the same farm tend to have the same ratio of hot to mild peppers. If you get a hot one, you can spit it out; but if itâ€™s in your taco, youâ€™ll be stuck eating it.

Have all your other ingredients ready before frying the peppers so that they stay warm; they only take a few minutes to cook. For the tomatoes, I like to use one dry-farmed red, and one heirloom yellow; you may not need to use all the tomatoes. Be sure to drink the delicious juice they let off. It pays to seek out good corn tortillas. 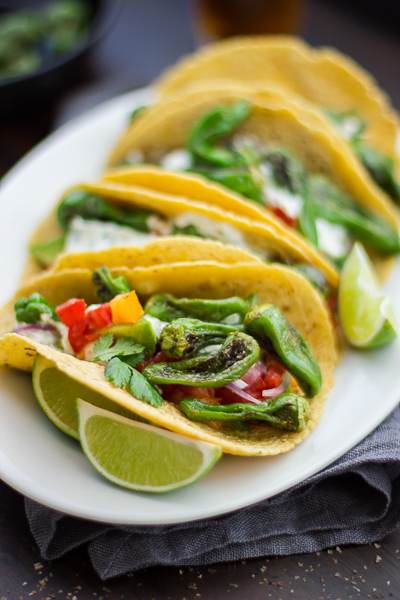 Dice the tomatoes, sprinkle with a pinch of salt, and let drain in a sieve while you get on with the recipe. In a small bowl, stir together the sour cream, cilantro, lime juice, and a big pinch of salt. Taste, adding more lime or salt if you like. Set aside, or cover and chill for up to a day or two. Use a pair of scissors to cut the stems off the peppers (their crowns are edible). Rinse the peppers and drain them well. Heat 1 T. olive oil in a 10â€³ cast iron skillet set over a medium flame until it shimmers. Add the peppers and cook, tossing occasionally, until blistered all over and blackened in places, about 5 minutes. They will pop and spit; lower the temperature if things are getting too crazy. Sprinkle with a few pinches of the smoked salt.
In another skillet, warm the tortillas on both sides until soft and pliable. Place the tortillas on a couple of plates, and build the tacos. I like the following order:

Top with a sprinkle of smoked salt and a few cilantro leaves. Serve immediately, with lime wedges for squeezing over the tops.