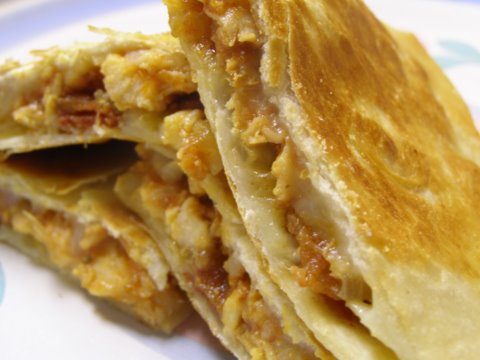 2 C. shredded cheese (I use Monterrey Jack, but anything would work)

Combine chicken and barbecue sauce. Set aside. Dice the bacon and add to a small skillet. Cook until desired crispness. Remove bacon from skillet with a slotted spoon to drain. Add the sliced onion to the bacon grease in the skillet. Cook for about 5 minutes, until fully cooked. Remove onions with a slotted spoon and drain. Build quesadillas – on a tortilla, layer cheese, chicken, bacon, onion, more cheese and top with a second tortilla. Cook quesadillas in a large skillet with melted butter.