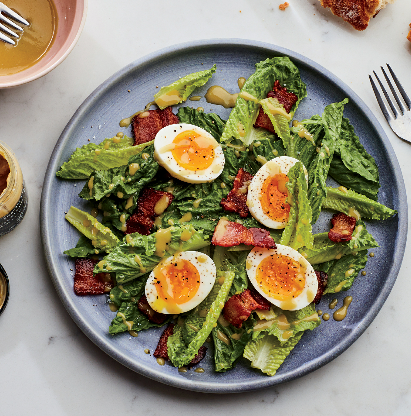 If your eggs have been in the fridge, peel them and put them in a large bowl of lukewarm water to let them come to room temperature while you cook the bacon. (Change out the water if it gets too cold). Dry the eggs with a clean kitchen towel and slice them in half. Cook the bacon in a medium skillet over medium heat, stirring frequently, until it’s crispy and a good amount of fat has rendered, about 10 minutes. Use a slotted spoon to transfer the bacon to a paper towel–lined plate. In a small bowl, whisk together the mustard, vinegar, and maple syrup. Keep whisking while you stream in the olive oil. In a large bowl, toss the romaine with 2 T. of the maple vinaigrette. Divide the romaine among four shallow bowls. Divide the bacon among the bowls and put four egg halves on each salad. Season each egg half with a little kosher salt. Grind a generous amount of pepper over each salad and serve with extra vinaigrette on the side. Alternatively, pack the undressed salads into four separate containers, and take to work with a bit of dressing on the side.