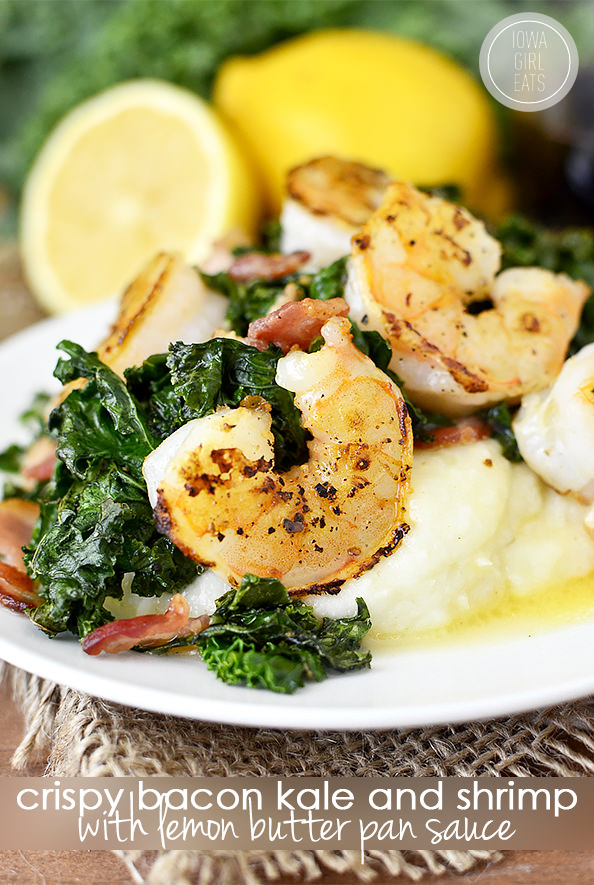 Preheat oven to 400 degrees then line a baking sheet with foil and set aside. Add bacon to a large skillet over medium heat then sautÃ© until starting to crisp and turn golden brown. Add the kale, season with salt and pepper, and then toss with tongs to coat in the bacon grease (may need to add half the kale, let it wilt a bit, then add the other half.) SautÃ© until slightly wilted, 2-3 minutes, then pour onto prepared baking sheet and roast until kale is crisp, 7-9 minutes. Meanwhile, pat shrimp dry with paper towels then season both sides with salt and pepper. Heat oil in skillet over medium-high heat then add shrimp in batches as to not overcrowd the skillet. SautÃ© shrimp for 1-2 minutes a side then remove to a plate. Turn heat up to high then add chicken broth, butter, and a generous squeeze of lemon to the skillet (don’t need the entire half or it will be a touch too sour.) Season with salt and pepper then boil until reduced and slightly thickened, 4-5 minutes. Plate kale and bacon then top with shrimp and lemon butter pan sauce. Serve with mashed potatoes, cooked rice, or parmesan grits.