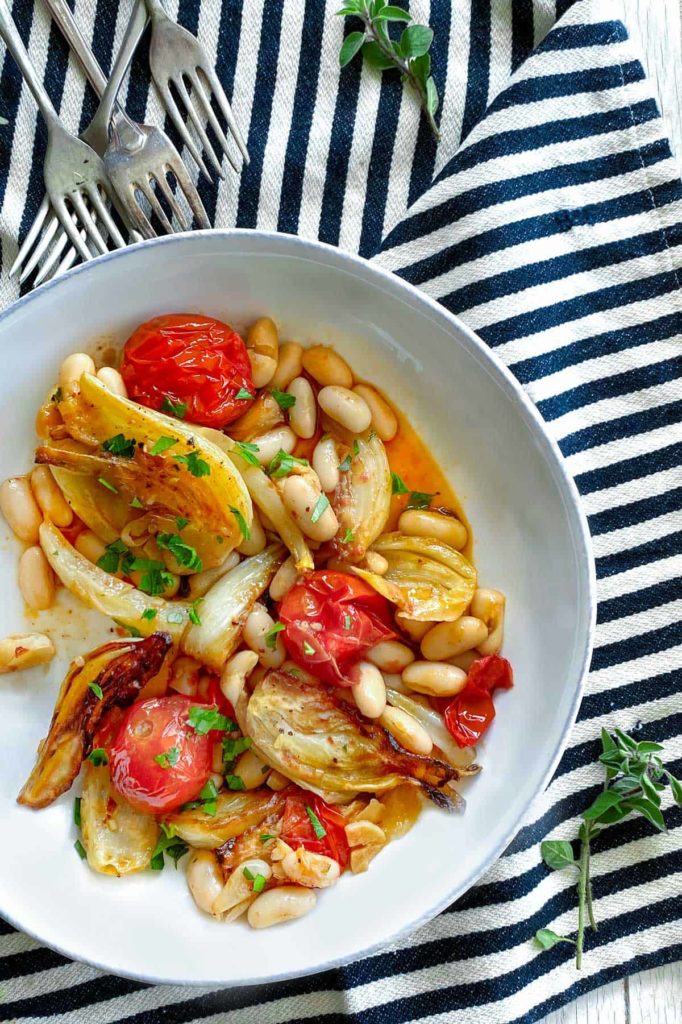 2 large fennel bulbs (fronds not needed but can be chopped and used to garnish, if desired)

Preheat oven to 425Â°F. Trim the fennel so you are left with just the white bulb. Cut the bulb in half vertically, from bottom to top, and then cut each half into 1/2-inch-wide wedges, slicing through the core, which will help keep the leaves attached to the wedge. If your fennel has fronds, you can chop them up to use as a garnish. Heat oil in large ovenproof skillet over medium-high heat until very hot, about 3 minutes. Add fennel wedges, arranging them in single layer. Sprinkle with 1 tsp. of salt and cook, turning occasionally, until fennel begins to brown and soften, 10 minutes or so. Add tomatoes, oregano, garlic, red pepper, remaining tsp. of salt and black pepper. Fold together gently using a spatula. Transfer the skillet to the oven. Bake fennel and tomatoes until soft, about 20 minutes. Remove the skillet and gently mix in the drained beans; then bake for 5 minutes longer, to heat through. Divide the mixture among large shallow bowls. Drizzle each bowl with a tsp. of extra virgin olive oil, and sprinkle with coarse salt, black pepper and chopped fennel fronds or parsley. Serve warm or at room temperature.