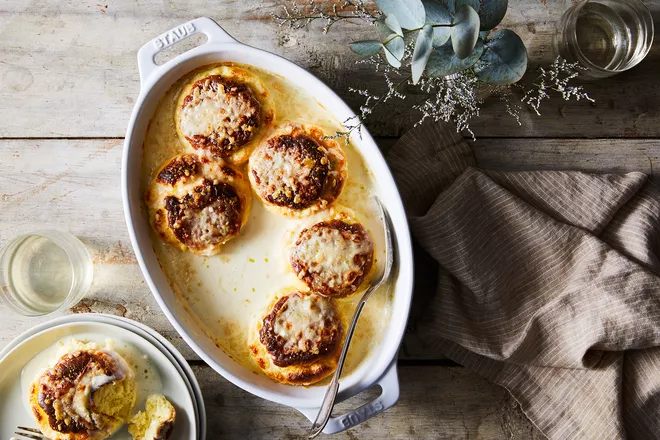 Preheat the oven to 425Â°F and generously grease six 8-ounce ramekins. In a medium saucepan over medium-low heat, melt 1 T. of the butter. Add the leeks and cook, stirring, until soft but not brown, 4 to 5 minutes. Transfer to a bowl and set aside. Melt the remaining 4 T. of butter over medium heat in the same saucepan that you used for the leeks. When the butter stops foaming, whisk in the flour and cook, whisking, for 1 minute. Whisk in the milk and cook, whisking, until the mixture boils and thickens. Stir in the salt, nutmeg, 1 1/4 C. of the cheese, and the leeks. Transfer a third of the mixture to a bowl, whisk in the cream, and set aside. Whisk the egg yolks into the remaining two-thirds, then transfer the mixture to a large bowl. In the bowl of an electric mixer fitted with a whisk attachment (or in a large bowl with a handheld mixer), beat the egg whites with a pinch of salt until they hold stiff peaks. Stir a third of the whites into the yolk mixture to lighten it, then fold in the remaining two-thirds until no streaks of white remain. Divide the mixture among the greased ramekins, smooth the tops, then run the tip of your finger around the inner edge of each ramekin (this will help the soufflÃ© rise higher and straighter). Arrange the ramekins in a baking dish and pour enough hot water into the baking dish to come half an inch up the side of the ramekins. Transfer to the oven and bake until puffed, deep golden brown, and set within, about 25 minutes. Remove from the oven, remove the ramekins from the water bath, and let the soufflÃ©s cool (they will deflate). Run a knife around the inner edge of each ramekin, then turn the soufflÃ©s out into a gratin dish and pour the reserved cream mixture over and around the soufflÃ©s. Top each with some of the reserved Parmigiano. At this point, the soufflÃ©s can be covered with plastic wrap and refrigerated for up to 24 hours (Iâ€™m telling you, this recipe is magic). When youâ€™re ready to bake the soufflÃ©s a second time, preheat the oven to 425Â°F. Bake until the soufflÃ©s are puffed and browned (they will puff as much asâ€”if not more thanâ€”the first time they were baked), about 10 to 15 minutes. Serve immediately.