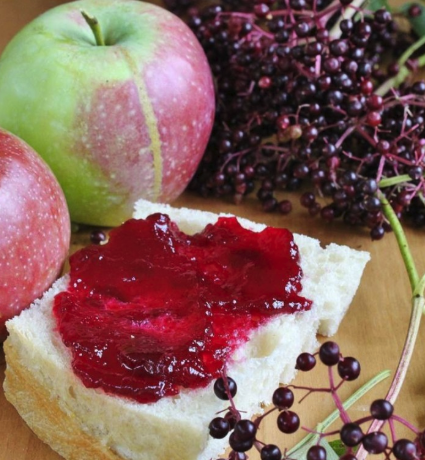 6 cups of elderberries, carefully picked over to remove any green berries and pieces of stems and leaves.

In a large saucepan, gently crush some of the berries with the back of a large spoon. You must be gentle, to avoid crushing the seeds, which releases a bitter flavor into the juice. Add the water and bring to a boil, stirring constantly, and gently crushing the berries with the back of the spoon, until enough of the berries have burst to make it liquidly. You wonâ€™t need to do much crushing because the boiling actually makes most of them burst. Add diced apples, return to a boil, and simmer for about 10-15 minutes, until apples are mushy. Strain through a fine mesh metal strainer, to remove seeds. You may gently push the berry and apple pulp through the strainer with the back of a spoon. But, again, avoid crushing the elderberry seeds. Put the juice/pulp, the sugar, and the lemon juice into a large saucepan, and return to a boil. The mixture will be thick, so stir frequently, scraping the bottom of the pot, to prevent scorching. Continue simmering and stirring/scraping for about 10-15 minutes, until it sheets off a spoon (or until it reaches desired thickness). Hint: Do not use the temperature test for doneness. Mine became quite thick and passed the spoon test while still at the boiling point of water, 212 degrees F. Itâ€™s a firm gel when cool. Pour into sterile half-pint jars, cover with sterile lids and rings, and process for 15 minutes in boiling water bath.