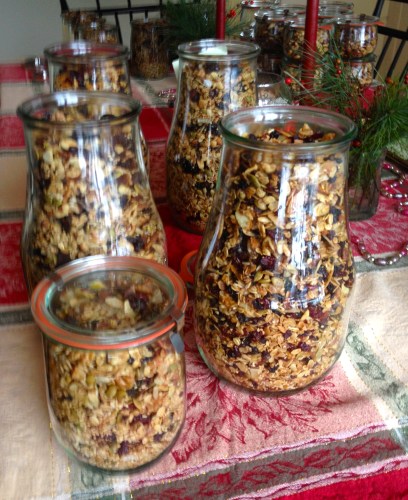 Some consider granola too high in calories and fat to be used as an even-day breakfast cereal, though it’s delicious that way. We also love to use it as a topping for fruit and yogurt. Pack some of this granola into an attractive glass jar: It makes a great hostess gift.

Preheat oven to 325Â°F. In a large bowl, toss together the oats, wheat germ, milk powder, nuts, sunflower and sesame seeds, and cinnamon. In a heavy saucepan, heat the honey and oil until hot but not boiling. Remove pan from heat: stir in vanilla. Pour the honey-oil mixture over the oats mixture and toss to coat thoroughly. Spread evenly in three 9- by 13-inch baking pans, or two roasting pans. Bake for approximately 45 minutes, stirring every 15 minutes until mixture is golden. Cool thoroughly; mix in the raisins, cherries, and cranberries.Â  Yield: About 10 cups