Serve shrimp with crusty bread for dipping in the richly flavored olive oil. The dish can be served directly from the skillet (make sure to use a trivet) or, for a sizzling effect, transferred to an 8-inch cast iron skillet that’s been heated for 2 minutes over medium-high heat. We prefer the slightly sweet flavor of dried chiles in this recipe, but tsp. sweet paprika can be substituted. If sherry vinegar is unavailable, use 2 tsp. dry sherry and 1 tsp. white vinegar. 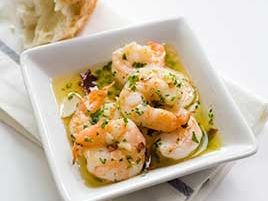