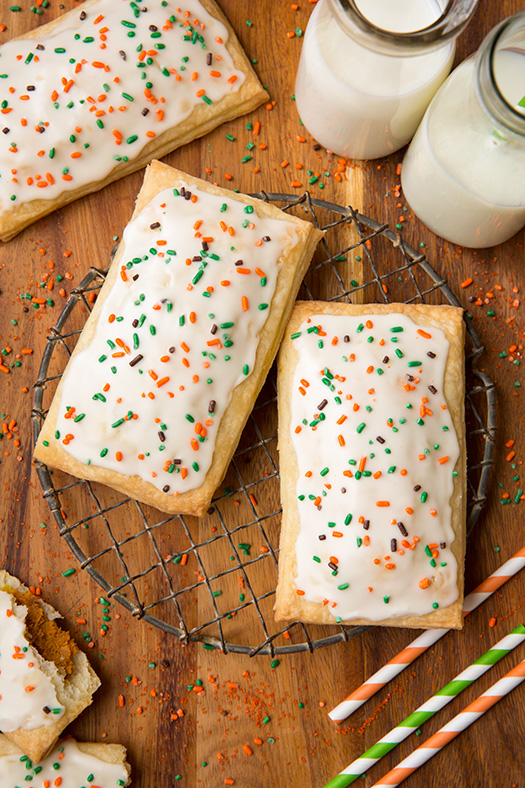 For the crust: In a food processor pulse together flour, salt and granulated sugar. Add butter and pulse mixture until resembles coarse meal (it won’t really come together in pieces much at this point, so don’t over-process, just pulse until butter is no longer in large pieces). Add 4 T. water and pulse several times, if it doesn’t come together in clumps add remaining 1 T. water. Drop mixture onto a clean surface, gather dough into a ball then divide into two portions. Shape each portion into about a 5-inch disk. Cover each with plastic wrap and chill 1 hour. Meanwhile prepare filling.

For the pumpkin pie filling: To a mixing bowl, add cream cheese, granulated sugar and brown sugar. Using a rubber spatula, stir mixture to blend, while running spatula against bowl to smooth any lumps. Lay pumpkin puree on several layers of paper towels. Wrap and press to soak some of the excess moisture from pumpkin, until you have 3/4 cup pumpkin puree. Add reduced pumpkin puree to cream cheese mixture along with cinnamon, ginger, nutmeg, allspice and salt and stir. Mix in egg yolk and vanilla extract. Cover bowl and chill until ready to assemble pop tarts.

To assemble pop tarts: Line two large, rimmed baking sheets with parchment paper or Silpats. Working with 1 chilled disk of dough at a time (keep other in fridge to chill), roll dough out onto a floured surface to about 13 by 11-inch rectangle (when edges start to crack a little when rolling, seal them and continue rolling), then trim edges to get a 12 by 10-inch rectangle (to even the edges). Then cut into eight 5 by 3-inch rectangles (cut in half through the longness then three cuts through the opposite). Arrange 4 of the rectangles, spaced evenly apart on prepared baking sheet. Spread a slightly heaping 1 1/2 T. of pumpkin pie filling evenly down the center of each rectangle, leaving about a 3/4-inch rim on all sides uncoated. Dampen fingertips with water and run along uncoated edges of pop tarts. Top each with another rectangle, then seal edges with your fingertips, then reseal with a fork (I didn’t seal with the fork, I just did a double seal with my fingertips because I wanted them to look more like the real thing). Poke the top center of each tart 3 times with a fork. Cover and transfer to freezer to chill at least 2 hours or up to one week. Repeat process with remaining disk of dough. After chilling, position one oven rack near top third of the oven and a second oven rack near bottom third of the oven. Preheat oven to 375 degrees. Bake frozen tarts until golden, rotating racks once halfway through baking, about 25 – 30 minutes. Allow to cool on baking sheet several minutes then transfer to a wire rack to cool completely before icing.

For the icing: In a mixing bowl whisk together all icing ingredients well then add more half and half about 1/2 tsp. at a time to reach desired consistency. Spread over tops of cooled pop tarts, leaving a small rim uncoated around all sides. Sprinkle tops with sprinkles if desired and allow glaze to set at room temperature. Store in an airtight container.