For the French Toast Sticks: 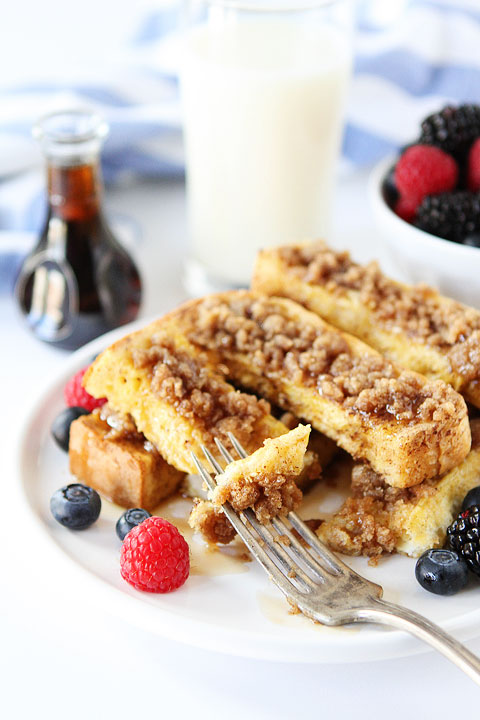 Preheat oven to 350 degrees F. Line a large baking sheet with a Silpat baking mat or spray with non-stick cooking spray. Set aside. Cut bread slices into thirds then set aside. Cut the bread slices into 3 sticks. In a large shallow dish, whisk together eggs, milk, vanilla, and cinnamon. Dunk bread sticks into batter, let excess drip off, then place onto prepared baking sheet. Bake for 9 minutes. While the French Toast Sticks are baking, make the cinnamon streusel. In a medium bowl, combine flour, brown sugar, cinnamon, and butter. Mix together with your hands or a fork, until you have a crumbly mixture. Remove French Toast Sticks after the 9 minutes. Flip the sticks over and sprinkle the cinnamon streusel over the sticks. Place the pan back in the oven and bake for another 9-10 minutes, or until sticks are golden and streusel is set. Remove from the oven and serve warm, with syrup, if desired.