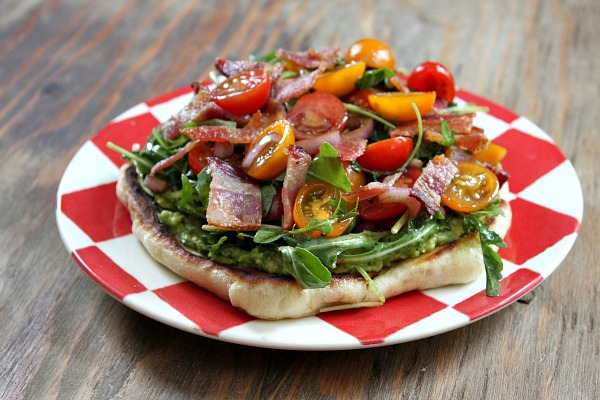 In a large glass, whisk together the water, 1 T. flour, the yeast and sugar; let stand until foamy, about 6 minutes. Using a food processor, combine the remaining flour and 1 tsp. salt. With the machine on, pour in the yeast mixture and process until the dough forms a ball. Mix for another minute, then transfer to a large greased bowl, turning the dough to coat. Cover and let rise until doubled in size, about 1 hour. Meanwhile, in a large bowl, toss together the tomatoes, shallot, olive oil and vinegar; season with salt and pepper. Let stand at room temperature. In a medium bowl, mash the avocados; press plastic wrap directly onto the surface to cover. Preheat a large skillet; add the bacon and cook, turning once, until crisp, 12-15 minutes. Drain on paper towels. Preheat a griddle over high heat or an electric griddle to 400. On a lightly floured work surface, divide the dough into 4 pieces, then flatten each one into a disk. Stretch each disk into a 10″ round (if dough is too elastic, let rest for 5 minutes). Brush one side of each round with olive oil and, working in batches if necessary, transfer to the griddle, oiled sides down. Cook, lightly brushing the tops with more oil and flipping once, until browned, about 6 minutes on each side. Transfer to a cutting board. Spread the avocado evenly on each crust, leaving 3/4″ border. Toss the watercress with the tomato mixture and scatter over the pizzas. Crumble the bacon on top.