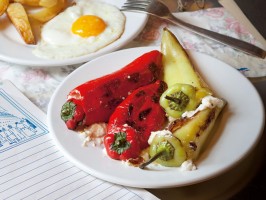 Cut the tops off the peppers and carefully remove the seeds, keeping the peppers whole. Crumble the feta and stuff tightly into the peppers, then replace the tops. Heat the olive oil in a skillet and saute the peppers over high heat (propping the peppers up against the sides of the skillet so the filling doesn’t ooze out), gently turning them over, until they are lightly browned on the outside, and the feta is melted a bit but not running out (the hats may fall off, but replace when serving). Serve whole or cut into thick slices, with the oregano crumbled over the top, if desired.