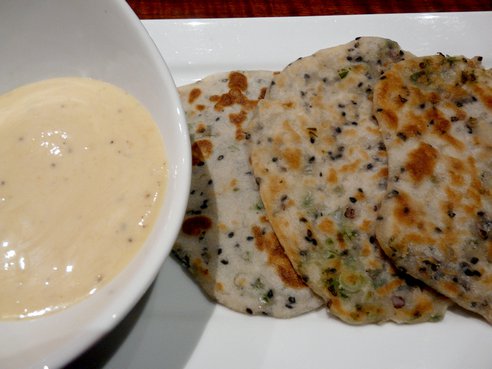 1/4 cup all-purpose flour, plus more for rolling out

About 20 ramps, white and pink parts finely chopped to yield about 1/3 cup

For the pancakes, combine the flour, sesame seeds, and salt in a medium bowl. Slowly pour in the boiling water, stirring with a fork to combine. The mixture will be thick and hard to work, but keep at it until its cool enough to start kneading by hand. If it’s too tacky, add in another tablespoon or two of flour until the dough is workable. Knead the dough for about 5 minutes, until smooth. Shape the dough into a ball and let it rest, covered with damp towel in the bowl, for 30 minutes. In the meantime, combine the ingredients for the miso sauce, adding in ground black pepper and cayenne to taste. Mix well. Keep covered and refrigerated until ready to use. When the dough has rested, divide it equally into 8 pieces. Roll each piece into a ball. On a lightly floured board, roll a dough ball out to a flat circle about 1/4-inch thick. Spread a heaping teaspoon of the ramps all over the dough. Starting at the edge of the circle, roll the dough up into a tight cigar. Coil the cigar into a snail or a cinnamon roll shape. Flatten the snail/roll and roll it out again to about 1/4-inch thick. Repeat with the rest of the dough. Heat a heavy-bottomed skillet over medium heat. When the pan is hot, add in a half teaspoon of bacon fat, peanut oil, or canola oil. Cook the pancake for 60-90 seconds on each side or until golden brown, adjusting the heat as necessary. Move the finished pancake into a warm oven until the rest of the pancakes are done. Repeat with the rest of the dough. Slice the pancakes into quarters and serve with the miso sauce.