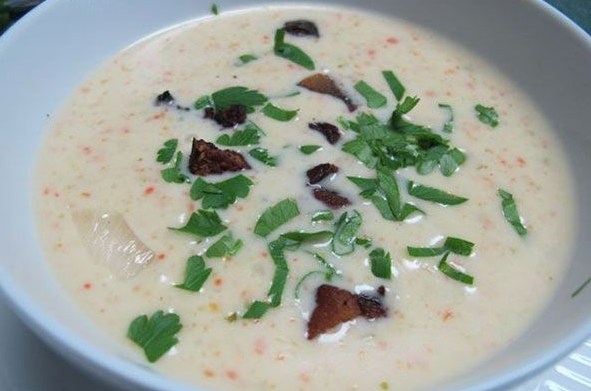 Salt and pepper to taste

Melt the butter in a large soup pot. SautÃ© the bacon in the butter until crisp and brown. Remove bacon and let it drain on paper towels. Add the vegetables to the bacon drippings and cook, stirring until the onion is transparent. Add the chicken stock and the beer to the pot and bring to boiling. Then lower the heat to simmer and cook until the vegetables are tender. In a separate pan scald the milk over medium heat. Combine the cheese and flour in a bowl and toss to combine. When the milk is hot, add the cheese-flour mixture. Cook and stir until the cheese melts and the mixture thickens. Add the cheese mixture to the soup pot along with the heavy cream. Season to taste with salt and pepper. Heat to serving temperature. Garnish with the reserved bacon and parsley.