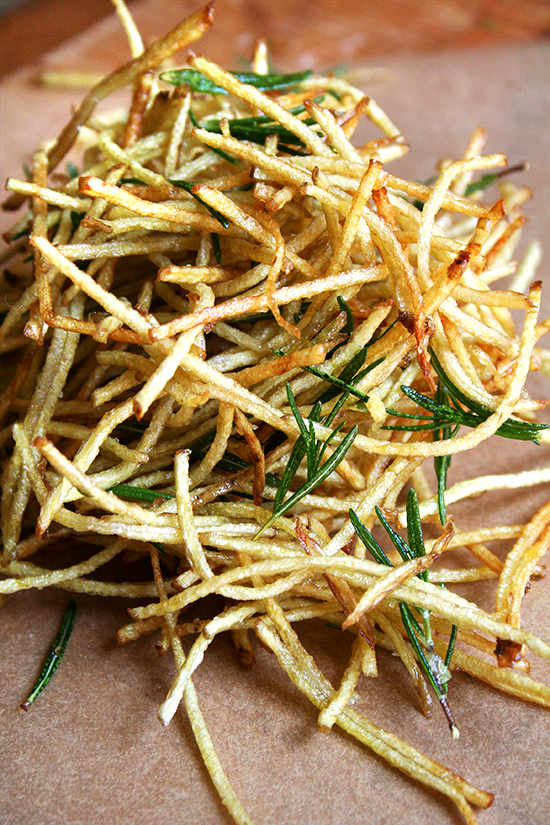 For the lemon salt:

Zest of one lemon

Sunflower oil (I used a mix of canola and vegetable oil)

A few sprigs of rosemary

* The potatoes can be julienned in advance â€” about an hour or so â€” before they start turning slightly brown. A little brown is OK, but too much brown is probably not a good idea. Storing the potatoes in water will prevent browning, but you also must dry the potatoes very well before you start frying, which is kind of a pain.

Make the lemon salt: In a mortar and pestle, bash together the lemon zest and salt until salt is flavored, colored, and fine. Place in a dish. Use whatever you need right away or allow it to dry out for a couple of hours before storing it. (I made my lemon salt a day in advance and stored it in the mortar wrapped in plastic wrap.) Heat 2 to 3 inches of oil in a sturdy, high-sided pan; bring to deep-frying temperature (350Â°F; to avoid oil catching fire, be sure to maintain its temperature at 350Â°F). Jamieâ€™s tip: place a potato in the cold oil before you turn the burner on. When the potato rises to the top of the oil and begins to turn golden brown, the oil is ready. Remove the potato piece and start frying in small batches. Â Pat the julienne strips dry with some paper towels to remove any excess starch. Making sure youâ€™ve got a slotted spoon or spider (which is like a flat colander with a handle) and a big pile of paper towels to one side (I did not use paper towels, but instead transferred the finished fries to a large aluminum bowl, which allows for easy tossing), carefully place some of your potatoes into the pan of oil (donâ€™t overcrowd it) for a couple of minutes (1 to 2) until golden brown and crisp. Cook potatoes in batches until they are all used up. Add the rosemary for the last 30 seconds. (Note: Itâ€™s hard to judge when the last 30 seconds will be, but the rosemary can be in the oil for as few as 10 seconds. I basically added the rosemary in at the last few seconds of each batch). Remove the potatoes and rosemary to the paper towels (or a large bowl) to soak up any excess oil; dust with your lemon salt. Serve immediately, perhaps alongside a blue cheese burger.