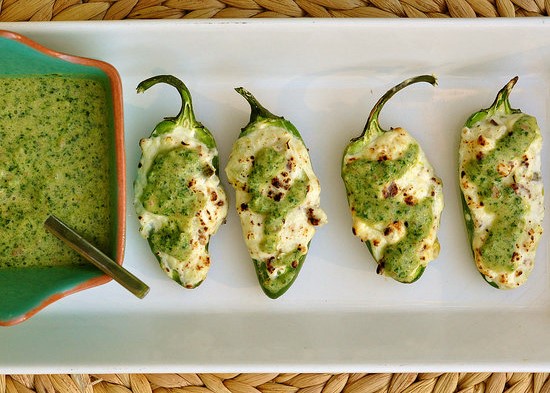 Preheat the grill to medium-high heat. Cook the bacon in a skillet or oven until crispy. Let cool and crumble using a knife or your hands. Mix the bacon, cream cheese, jack cheese, scallions, lime juice, garlic, and salt in a large bowl. Divide the cheese and bacon mixture between each of jalapeÃ±o halves, filling each completely. Make the cilantro sauce: Cut the majority of the stem off the cilantro. (Some stem is fine and will enhance the flavor.) Place the rest of the bundle in a small food processor with the sour cream, lime juice and salt until well combined. Set aside. Place the pepper on a lightly oiled grill (a grill pan or grill stone will work, too). Cover and grill the peppers 7-9 minutes until the bottom has browned and the cheese has melted. If desired, use a small kitchen torch to lightly brown the top of the jalapeÃ±os. Arrange the jalapeÃ±os on a platter with the cilantro sauce.