The Kidlet loves Sonic the Hedgehog.  He plays sonic unleashed on the xbox, and he and daddy have downloaded the oldskool versions of sonic (horrific graphics and all) and he loves playing those, too.  He’s got an eductional sonic game for his leapster — well, you get the idea.  He thinks the little blue speed demon is awesome.  Right now about the only thing I can think he likes more are bakugan; but that’s another post altogether! 😉 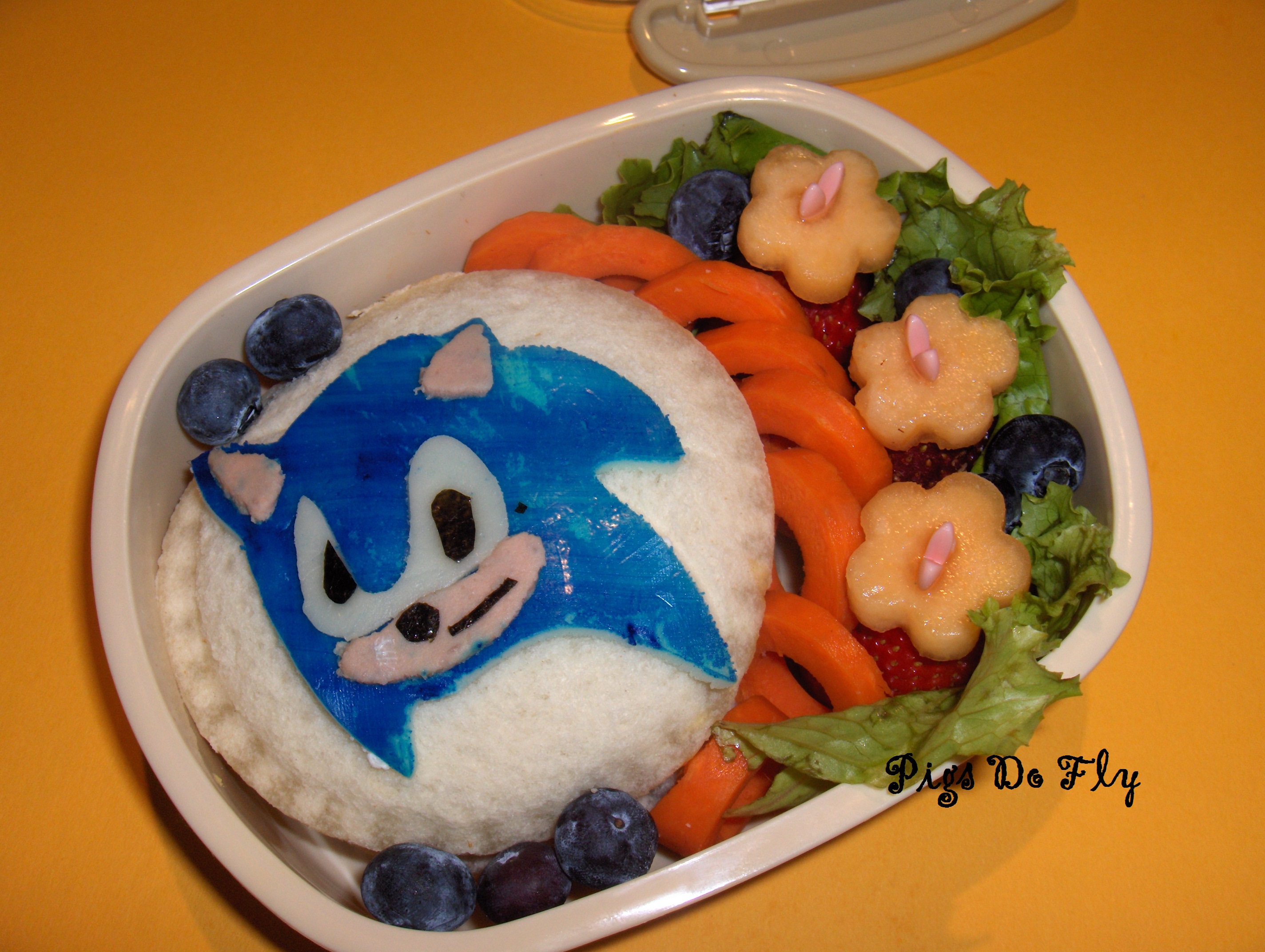 Seeing as there are no actual blue foods, and sonic is bright blue, I resorted to food coloring.  I tried edible markers (designed for cookies I think) but they didn’t work well on the cheese.  The dampness would cause the marker to stop working, and it was super streaky.  I wanted a little bit of variation in color, but the marker was way too much.  So, I switched to food coloring.  I’d picked up a wilton 12 color set and some little paintbrushes a while back, thinking I would try painting cheese (although when you look at something like this from pkoceres, it’s enough to make you give up before you start; amazing!) so I mixed a little blue paste with water and gave sliced mozzarella a coat, and then “cut” him out basically freehand, looking at a picture, using a needle like tool that is actually designed for quilling.  When you aren’t in Japan with all the tools readily available, you have to make do!  I’m using (new and unused, food only) items intended for other crafts — quilling tools, scrapbooking scissors and punches, beading pliers, icing tips, and so on.  I finished him with a little bologna and nori accents.

Sonic sits on a stuffed sandwich.  Also in there are carrot rings (ok, they aren’t exactly the gold colored rings that he collects in the games, but cut me some slack! ;)), melon flowers picked onto strawberries and a few blueberries for filler.  I didn’t like that you could see the bottom of the box in the lower left at this angle, so I went back in and tucked in another couple blueberries.  I also added three little Meiji candies, those apollo strawberry and chocolate cones.  I was just too lazy to cart my camera back downstairs and take a new picture.

Total time spent: about 25 minutes, but most of that was spent on sonic, which I did ahead of time again, wrapping him in plastic wrap until lunch assembly. I also cut the carrot rings early, stashing them in a small tupperware container.  So at packing time I just needed to “glue” sonic to the sandwich with a little whipped cream cheese, cut the melon flowers, stick them on the strawberries, and then pack everything in.  Easy Peasy!

Posted by Kristen in Bento