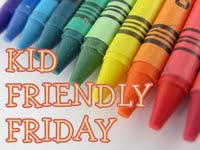 The other day while I was volunteering in the kidlet’s classroom, I noticed that another child used the exact same AM snack container as we did.Â  Since they have snack outside right before recess, and the containers get dumped into a basket to be carried back inside, I figured we could end up getting the wrong container pretty easily.Â  What to do?Â  Well, I suppose that we could have put our name on ours with a sharpee, but whats the fun in that?!

Instead, I pulled out some opaque paint pens and let the kidlet go to town.Â 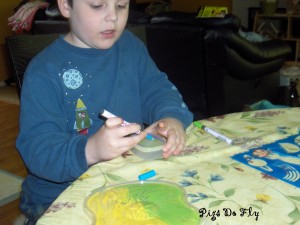 We had some stencils as well, and he started to use those, but then decided to color over everything in an abstract rainbow pattern. 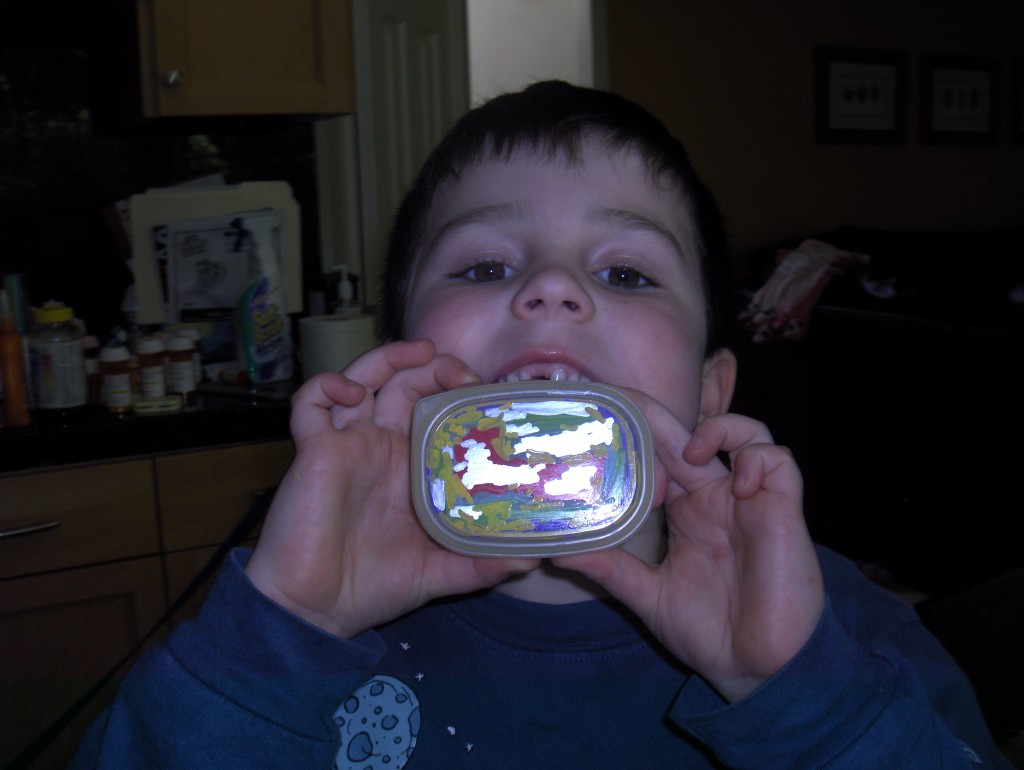 He wanted to do more, so we personalized one of his boxes I use for his bento lunches as well as some of the small tupperware containers that I use for ranch dip. 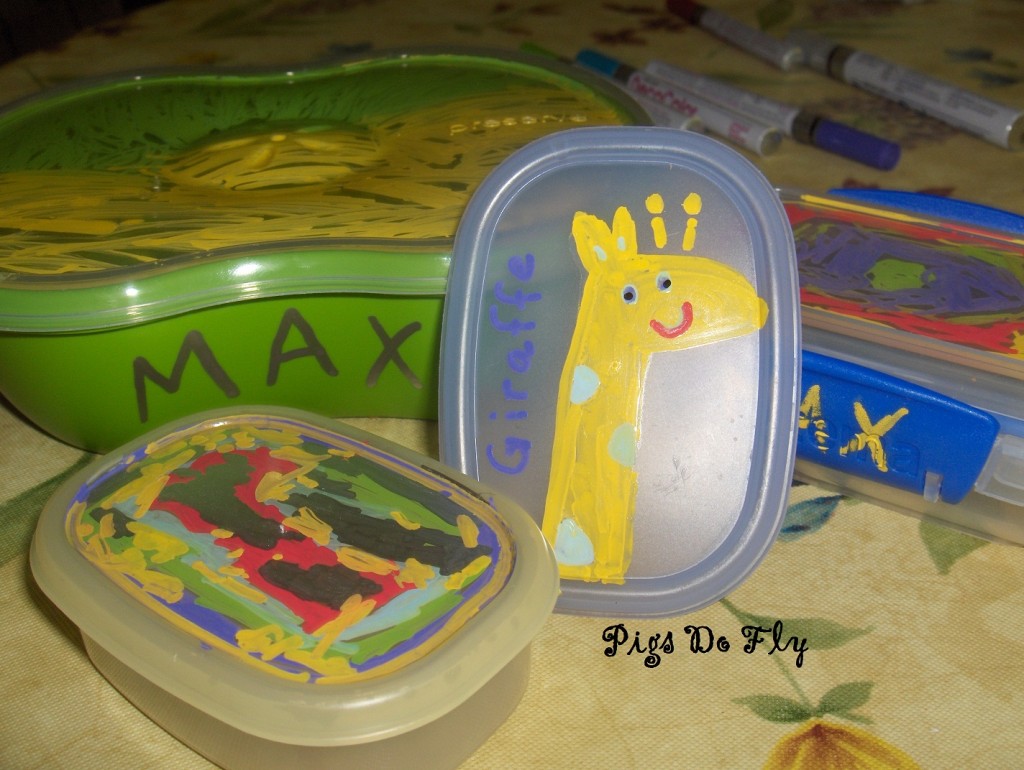 This just isn’t my day.Â  I’ve already screwed up my about page while trying to update it, and lost this post twice, when I thought I had it copied and in the buffer.Â  Ah well.Â  Too much work to re-do all those paragraphs, so I’ll paraphrase 😉

In an attempt to get out a little bit (I don’t have many friends and feel so isolated much of the time) and to get to spend a little more time scrapping (sometime I really enjoy but just don’t seem to have the time or space to do) I’ve joined a meetup group.Â

Right now the only scrapbooking I’m getting done at all is the baby scrapbook that was mostly done for me at my baby shower.Â  Each attendant made a 2 page layout with a calendar on one side and the other side set up for pictures.Â  I put the calendar up on the fridge and jot down notes daily as they come up — funny tidbits, milestones, activities and what not.Â  Then I just have to get the photos, paste them in, do a little journalling and voila.Â  On one hand, that is really great for getting it done.Â  On the other, most of the attendees aren’t skilled croppers and the pages aren’t what I’d done myself.Â  Plus, I don’t have the extra matching papers for framing photos or adding any extras.

So, even if I only make it to one monthly event, I should be able to get a few pages done.Â  While much of my crafting materials are packed away in one of 10 large plastic bins, I do have a smaller, handled one with basic tools and such I created to have on hand for the baby year book.Â  I can pick up some papers, add a few embellishments and my photos, and be off to crop in company!

Posted by Kristen in Crafting

When I haven’t crafted in a while, I get twitchy.Â  Whether its scrapping and paper crafting, involved art projects with the kiddo (coloring just doesn’t cut it ;)) or even assembling a beautiful bento lunch, I just seem to need a creative outlet.Â  We have an extra bedroom and it was once my computer / craft room.Â  However, 18 months ago my mom left her husband and needed a place to stay and we were happy to invite her in.Â  My stuff got pushed into the play room and my craft room became my mom’s bedroom.

The playroom is plenty large to support my son’s toy and place space and an office space for my computer desk.Â  But although my paper crafting stuff will almost fit; there is no place to actually spread out, set up my sewing machine (yes, on paper), die cuttersÂ and other tools.

My mom hasn’t been using the room regularly for more than six months now; maybe its even closer to a year at this point.Â  She has stayed a day or two here and there, and was here with the kidlet while we were at Blizzcon, but overall, the room isn’t getting used.Â  She isÂ living a couple hours away with her new boyfriend.Â  And while I would prefer to have her here in town, close, if she isn’t going to be using the space — I need it back!Â  We do have a pull out couch that isn’t half bad, comfort wise, so she’ll still have a place to sleep when she does overnight visits. Â I desparately need to spread out, have room to work on my crafting whenever I get the twitches.

That’s one of my projects for the next month.Â  In the meantime, I resort to one of my fall backs, doing a premade project, or digging out something old that I haven’t quite finished (hah!Â  Lots of that around here).Â  This morning I pulled out an old scrapbook page about my son’s obsession with Thomas the Train and his friends, and finally worked out the finshing touches.Â

Although I am a big believing in hand journaling, like most people, I hate my handwriting, so when I can get away with it (the pictures really tell the story here!), I’ll avoid it or use my computer to print it out.Â  Although I called this “finished”, I may go back and write in some basic info on the kidlet’s age and such on the tags in the lower left.

The most involved bit was the large “tear bear” tag.Â  The bear is made using a textured heavy mulberry paper, which is dampened and then torn into the shapes and then further distressed with a toothbrush and a little sanding block to fuzz up the fibers in the paper. His face is finished with paper bits I shined up with paper glaze, gel pens, and some chalk.Â  I disressed the edges of the background paper layers with a distressing tool (basically a razor blade encased in plastic with a wedge missing to expose the blade to the paper and then added some brads and machine stiching to further secure it together after gluing.Â 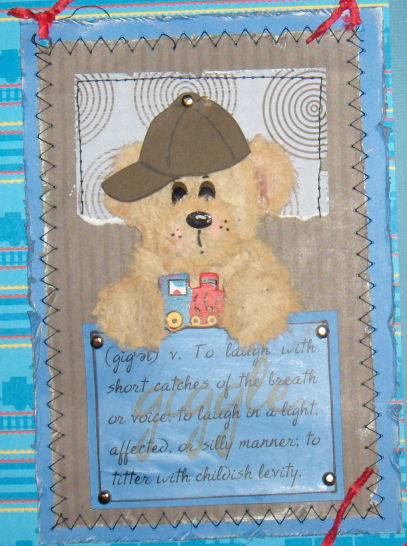 Add in a paper hat and a train bead with the shank snipped off, and there you go!Â  Overall,Â  I am pleased with this project.Â  He has finally moved on from the insane train obsession that lasted at least two years, so I’m glad to have the reminder in his scrapbook of those days where all I heard was “Let’s play trains, Mommy” for (literally) hours on end!

â€œLife is a train of moods like a string of beads; and as we pass through them they prove to be many colored lenses, which paint the world their own hue, and each shows us only what lies in its own focus.â€ ~Ralph Waldo Emerson